Online shopping, remote or hybrid learning and working modes, electronic banking, or process automation are some of the global benefits of digitization. In recent years, we have moved online - not only for business but also in many aspects of private life. Apart from the obvious benefits, also has its dark sides.

Privacy breaches in form of personal data leaks, loss of money caused by extortions, or disruptions in infrastructure caused by direct attacks are just some of the cyber threats. According to a report by Crowe and the University of Portsmouth, as early as 2019, a year before the COVID-19 pandemic, the global losses resulting from fraud in all areas of the world economy exceeded $5 trillion. In turn, according to a study by Sophos, in 2020, 13% of Polish companies became the target of ransomware, i.e. forcing a ransom for allowing access to data blocked using malicious software. A year later, an identical study found that three-quarters of domestic companies had already fallen victim to online attacks.

- Cybersecurity sector is one of the most attractive markets for Polish technology companies. In 2021, global investments in startups that deal with network security grew more than twice. The scale of challenges is huge. Only 2/5 of domestic enterprises declare that they are prepared to deal with new threats resulting from digital transformation. Due to the current geopolitical situation, it is easy to prognosticate increased demand in this area. Examples of companies such as Silent Eight, DataWalk or Nethone, which collect high rounds of financing, acquire well-known clients and gain traction in more and more countries, constitute a good forecast for the future - says Paweł Grzegorczyk, Acting Director of the Innovation Development Department.

This year, the importance of cybersecurity has increased even more – both for Polish companies, institutions and individual citizens - after the Russian attack on Ukraine. Apart from direct attacks on the IT infrastructure, there is a less tangible, but equally dangerous, issue we are facing - the spread of fake news. All these aspects affect the dynamic development of the cybersecurity sector in Poland.

- In the face of the war in Ukraine and the progressive digitization, we should look at cybersecurity as an area where many innovative projects will grow in the near future. At the local level, we do not yet have venture capital funds specialized in financing projects specifically from this industry, so domestic start-ups must be based on capital from teams with a generic investment strategy. The involvement of Poland in the emerging NATO fund and the further development of this segment may lead to the creation of 1-2 new sector funds in the coming years - says Aleksander Mokrzycki, Vice President of the Management Board of PFR Ventures.

To show how many solutions in this area are created by local startups, we have prepared a "Polish cybersecurity sector" infographic in partnership with PFR Ventures and Infoshare, Poland's biggest technology conference. We have included 47 companies, which we have divided according into categories: 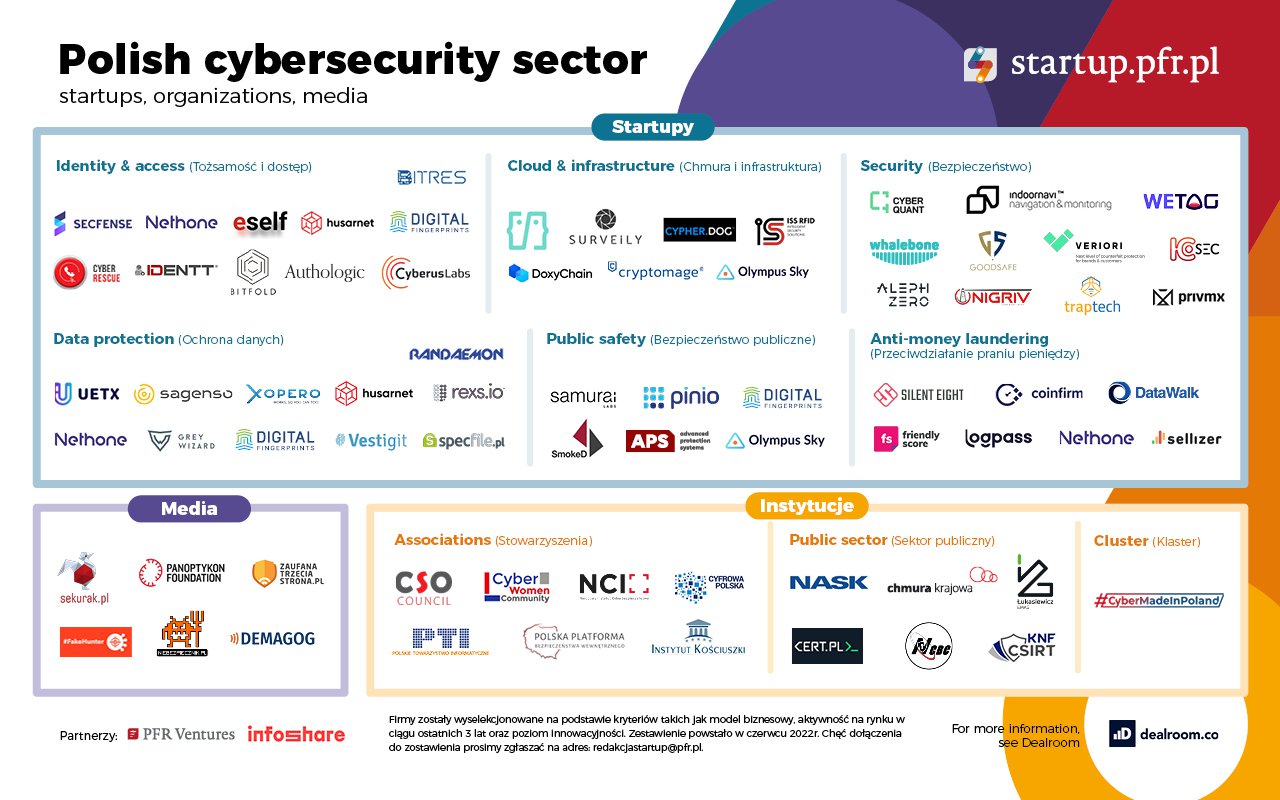 - The dynamic growth of the e-commerce market is associated with increasingly frequent threats that alarm many people. The risks associated with the unauthorized acquisition and use of our data are also commonly discussed. As organizers of a startup competition, we have observed a constant influx of projects in the area of cybersecurity. Their participation is approaching a significant level of approx. 10%. Among them, a large percentage of solutions are dedicated to large entities, but the share of projects aimed at small and medium-sized companies is growing significantly. We also notice an increase in solutions dedicated to consumers, e.g. in the fields of protection against extortion or personal data leaks (e-privacy). Recognizing the importance of the cybersecurity industry, this year Infoshare invited, among others, the founders of leading Polish start-ups, as well as several independent experts - pointed out Grzegorz Borowski, co-founder and CEO of the Infoshare technology conference, which will take place this year on October 6-7 in Gdańsk.

More information about the companies on the map can be found in the newly created "Cybersecurity in Poland" tab in the Dealroom database. 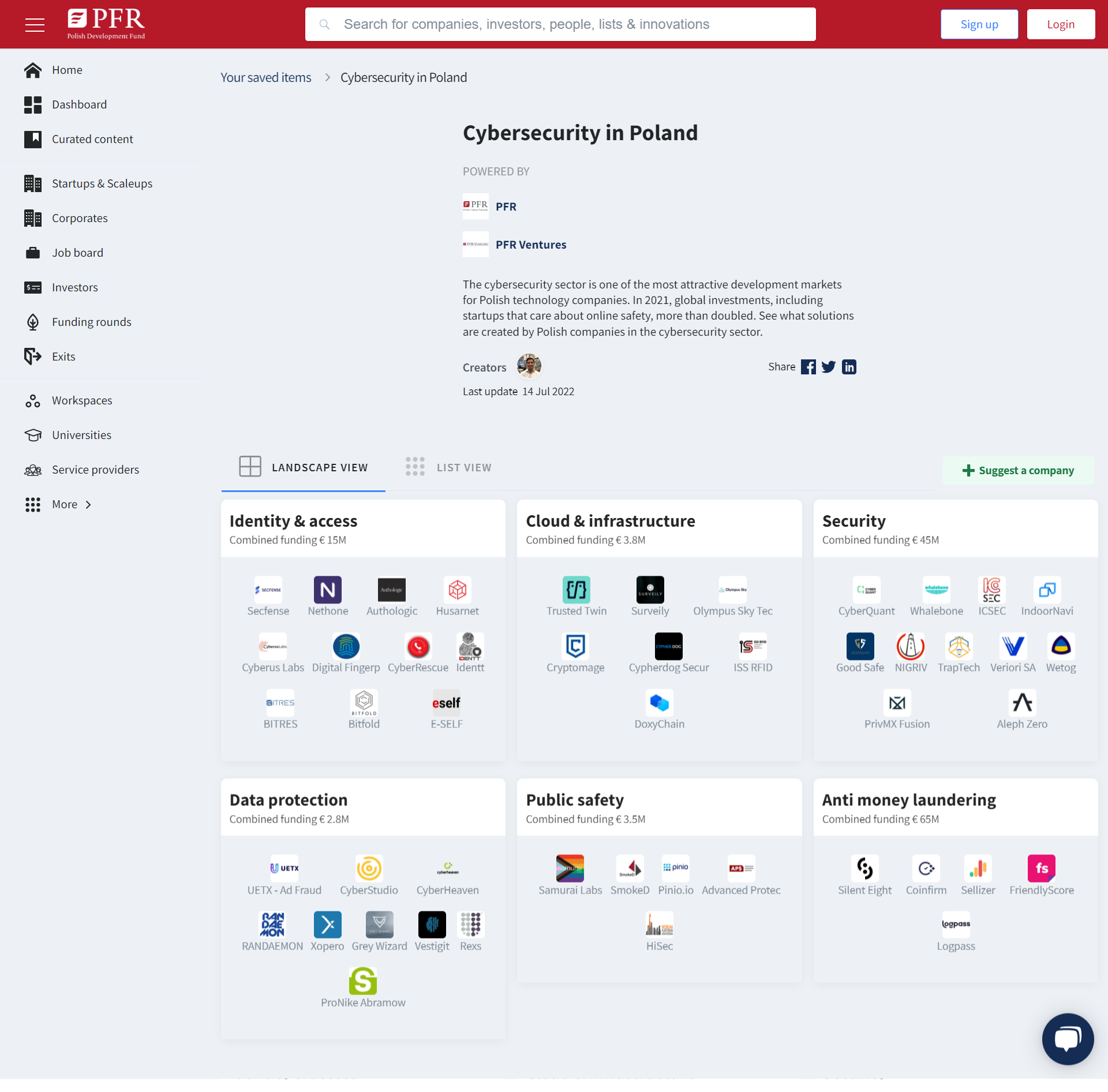 Business is not the only sector that responds to cybersecurity challenges – many institutions, both state and non-governmental, are active in this area. Educational and informational function is also performed by websites. This why both organizations and media could not be missing from the map.

If you run a startup that provides services or creates a product that helps deal with cyber threats, or perhaps you know and use a tool that has not been featured on the map so far – do not hesitate to report it to redakcjastartup@pfr.pl.

Tech solutions for Ukrainian refugees – how can they help?